A year to forget for Santos 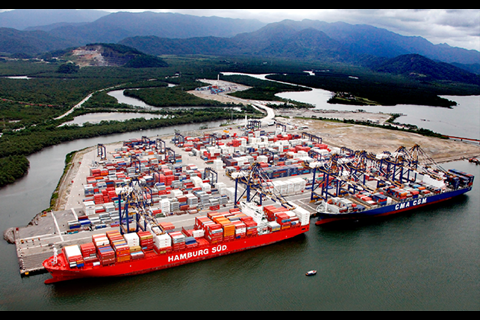 DP World has a diversification strategy for its Santos hub. Credit: DP World 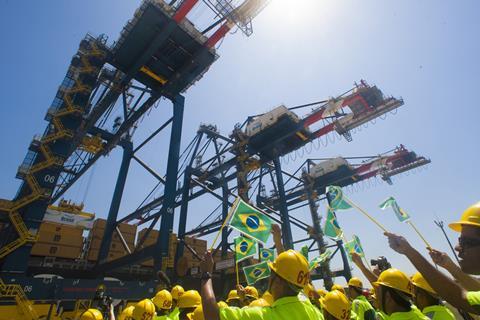 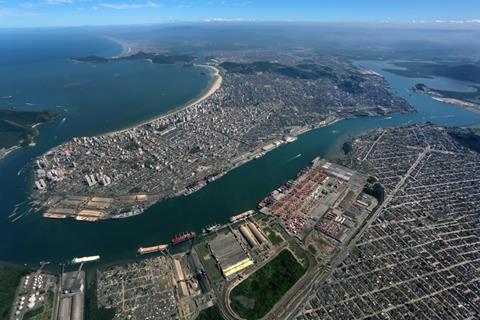 2018 was not a year that Companhia Docas do Estado de São Paulo (CODESP), the body that oversees Latin America's largest port, the Port of Santos, will want to remember. Investigations began on various current and ex-officials of the organisation for major fraud in respect of contracts signed with third party providers, in what is known as “Operation Triton”.

CODESP’s former chief executive, José Alex Oliva, was arrested, joining several senior colleagues who are all under investigation as part of the police probe. Luiz Fernando Garcia, who was brought in to replace Oliva, immediately embarked upon a major restructuring of the management team.

Legal action was also taken against the port's largest container terminal, Brasil Terminal Portuário (BTP), by bonded warehouse provider Marimex, which operates a facility just outside the main port area. It argued that BTP should not be allowed to apply an additional terminal handling charge (THC2) as a condition for the release of imported containers.

Marimex argued that BTP competes with it in the container storage market. So, while BTP might choose not to levy THC2 on containers stored at its own facilities, those released by it for storage at Marimex would have to pay the levy, which should be interpreted as unfair competition, since BTP is abusing its dominant position.

The case was brought before Brazil's competition court, Conselho Administrativo de Defesa Econômica (CADE), which ruled on October 16 that BTP had to refrain from imposing THC2 for containers heading for independent customs terminals in the Port of Santos’ natural hinterland.

According to CADE, by levying THC2, BTP may have affected competition in the market, while artificially increasing its own revenue. In addition, it would hamper the activity of independent bonded warehouses, making them a less competitive option for importers. Nevertheless, BTP successfully appealed the ruling.

According to BTP director, Antonio Passaro, the tariff is charged “for the service we provide at our facilities”, and is a practice also observed in ports in other countries. He was particularly critical of CADE’s understanding of THC2, stressing that its earlier ruling meant it was effectively “trying to regulate the regulator”, the reference being to Agência Nacional de Transportes Aquaviários, which regulates the level of THC2.

Despite the various legal shenanigans, container traffic through Santos for the first ten months of 2018 was up 5.4% to reach 3,456,578 teu.

The majority of the traffic is nowadays divided between four main terminal operators, with Brasil Terminal Portuária (BTP) handling around 35% of the traffic, Santos Brasil 35%, DP World Santos 15%, and Libra Terminais 13%.

Santos, in line with other ports in Brazil, has seen an increased presence of foreign ownership of its terminals in recent years. In December 2017, for example, Embraport was acquired in its entirety by DP World and traded throughout 2018 as DP World Santos. For the first 11 months of 2018, throughput amounted to 600,053 teu, which was a 3.7% decrease over the 623,143 teu posted for the same period in 2017.

Political problems faced by Brazil in recent years have created obstacles to the country's economic growth in several sectors, concedes Dallas Hampton, DP World Santos chief executive. “Brazil is a vibrant export economy and there is strong competition among the different marine terminal operators. This is healthy and we welcome it.”

However, he notes that the industry at large saw container traffic impacted by the general caution in the market given the uncertainty in global trade throughout 2018.

“As the largest economy of Latin America, Brazil occupies an important position on the international trade map. Facilitating trade with Brazil will therefore be one of the most effective ways to promote the country's long-term economic growth.”

While it is upbeat about the future container handling aspect of the terminal, DP World Santos is also focussing on other types of cargo, especially pulp, which forms part of its diversification strategy. It has signed a long-term agreement with Fibria, one of the world's leading producers of eucalyptus pulp from planted forests. The partnership includes the construction of new logistics structures in the dedicated terminal area, warehousing and the handling of pulp cargo.

“The ongoing construction of the Fibria port and logistics facilities at DP World Santos is a major project. The infrastructure plan includes 135,000 square metres of warehousing, an overpass road to connect the facility to Fibria's dedicated berth, expansion of the existing quay to accommodate the docking of two more vessels, and a rail link. When fully completed in 2020, DP World Santos will have a capacity to handle 3.3m tons of pulp cargo,” says Mr Hampton.

The deal with Fibria will include warehouses and equipment for storage, with investment to total R$700m (US$188m) in 2018-2020 as part of a concession that will see DP World Santos port services used until 2039.

Current box handling capacity is 1.2m teu in what is already one of the most modern container terminals in Brazil. The location of the terminal gives it strategic access to sea, road and rail, while the facility has 653 metres of berthing line and 207,000 square metres of terminal area.

As for draft, the Santos terminal offers up to 16 metres alongside its quay. At present, the largest vessel calling is Zim's 11,000 teu Cape Sounio, which commenced calls in June 2017.

“The Port of Santos is presently capable of handling vessels with a draft of up to 13.5 metres. However, to handle the next generation of mega ships, the port needs further dredging and Santos Port Authority is working to complete the necessary deepening work,” says Mr Hampton.

In line with other Brazilian container terminals, use of rail to move containers is relatively low, around 3%, although DP World says usage is rising rapidly.

In land-locked Bolivia, the government has allocated $250m of public money to develop Puerto Busch, which is located on the Canal Tamengo. This 11-kilometre long natural-artificial canal connects the Caceres lagoon, in Bolivia, to Brazil's Paraguay River, at the very head of the Paraguay– Paraná inland waterway system.

Antonio Rocha, who is the head of customs dispatchers at the city of Santa Cruz, believes that two terminals will be established: one to handle export minerals and the other aimed at attracting general cargo flows. Once Bolivia has access to the Atlantic Ocean not only will it boost GDP but it will also attract private investment of an estimated $700m in the local economy over the next five years.

Government policy is to use the port to export processed iron from El Mutún, on the border with Brazil, since this has estimated reserves of 40bn tonnes. Chinese investors have already moved in, having built a steel mill in the locality, specifically to cater for their own demands.

Furthermore, rather than using the Chilean ports of Arica and Antofagasta, Bolivia aims to export urea and ammonia from the Bulo Bulo hydrocarbon industry through Puerto Busch, as well as potassium chloride from its lithium industry in the Andes.

The inland waterway system as a whole annually carries grains, soybeans, sunflower oils and derivatives worth $1.2bn, as well as export clinker and cement.

"The natural markets [for these Bolivian products] are in the south: in Argentina, Paraguay, Uruguay, and Brazil; and also in Europe,” notes Mr Rocha.

He also confirms that local exporters are looking optimistically at the Bolivian government's project to create the South American Central Bioceanic Corridor. This will link the Peruvian Port of Ilo, on the Pacific Ocean, with Santos, in Brazil, by rail, crossing central Bolivia from east to west in the process.