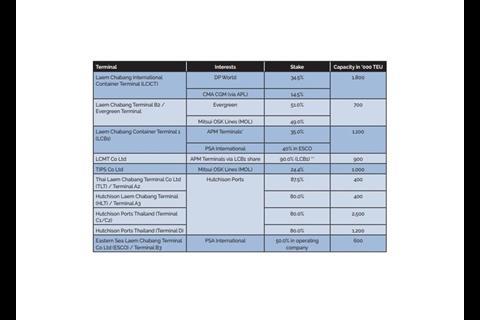 While the port of Klong Toey, Bangkok was the traditional port of entry for accessing Thailand, as a city port the need to build more modern, better-located deep-water facilities resulted in the development of Laem Chabang, some 130km to the south of the country’s capital.

Hutchison Ports has large-scale investment plans at Laem Chabang. In January 2019, the company inaugurated Phase I of its Terminal D operation, which utilises remote-control quay and yard cranes. This project is part of a longer-term multiphase development which aims to (eventually) increase total container capacity in Laem Chabang to 18 million TEU. It will include further capacity coming on-line in 2024 and again in 2030, as part of the Terminal E and Terminal F projects.

In support of the further development at Laem Chabang, the Port Authority of Thailand (PAT) has plans to complete a largescale dredging project to cater for larger and more frequent vessels, as Vice Admiral Kamolsak Promprayoon, Director-General, PAT, explained in Q1 2021. “The project will cover the dredging of two ship basins and a fairway, which will remove excessive soil and maintain the level of above-ground water within the safety standard. Furthermore, it will ensure that large container ships can dock with no problem and hopefully will attract more ships to use the port to its fullest capacity,” he said. The project is expected to take around one-year to complete.

According to the Vietnam Port Association (VPA) there are officially 320 ports in the country, along 1900 miles of coastline, with up to 80 per cent of container imports and exports actually moving through smaller facilities. A major issue in Vietnam is that the quality of infrastructure can vary considerably between its three regions in the north, central and south of Vietnam.

However, continued manufacturing growth in the past 10 years – and especially the most recent five-year period – has emphasised the requirement for further investment in port and supply-chain infrastructure to keep pace with demand but also to help reduce logistics costs for users and shippers.

This position remains and highlights the challenges faced. Yet such issues have not so far prevented major terminal operators and shipping lines from investing in the country, as Table 1 shows, with a wide range of major companies heavily involved.

Deep-water, largescale facilities in the north of country have been limited, until mid-2018 when Haiphong International Container Terminal (HICT) commenced operations, with the aim of reducing the need for transshipment to/from the country and allowing larger ships direct access. The facility has both MOL and Wan Hai Lines as stakeholders, with the major share of 51 per cent retained by Vietnam-based Saigon Newport Company.

The newly-developed port was built with the aim of supporting the growing electronics, automobiles and machinery manufacturing undertaken at the nearby industrial zone. However, despite the facility growing its volumes to around 500,000 TEU in 2020, this is still less than a 50 per cent utilisation, despite Haiphong handling over 2.5 million TEU in total – indicating that the smaller, older facilities are still attracting high volumes of container demand.

In central Vietnam almost all ports are very small facilities with limited water depth and infrastructure. The largest container handing port is Da Nang, which sees the majority of the traffic in the central region. However, in 2020 container traffic was only 201,800 TEU, according to Dataand, meaning that volumes were still very small compared to the bigger ports where major terminal operators and shipping lines are investing. However, Central Vietnam is an area seeing its manufacturing infrastructure develop, with the focus firmly on high-tech industries. This is the driving force behind the development of Lien Chieu Port. Current initiatives from local authorities include identifying suitable sites and investment initiatives, along with developing and operating terminals.

The Ho Chi Minh City area includes a network of ports and terminals around Saigon. Collectively, these facilities comprise one of the largest ports in the ASEAN area (after Singapore, Port Klang, Port Tanjung Pelepas and Laem Chabang). The importance of Ho Chi Minh City ports can be seen when noted that it accounts for around 70 per cent of the total throughput of all of Vietnam’s ports.

The Cai Mep-Thi Via Port (Cai Mep) is a deep-water port located around 80km south of Ho Chi Minh City, offering deep water and modern container handling infrastructure. The port facilities focus on serving the major production centres of the Dong Nai and Binh Duong areas, with onward shipment to North America and North Europe. In addition, CMA CGM has a stake in VICT (since its acquisition of APL) and DP World has developed Saigon Premier Container Terminal, although the operation offers a limited container capacity of 500,000TEU per annum as it continues to focus primarily on ro-ro traffic.

The major challenge for the container port industry in Vietnam is that a number of smaller ports are still attracting volumes that could be centralised in the more modern facilities, able to receive larger ships. This leads to regular congestion and delays, with containers still moving by feeder to regional transshipment hubs.

Local press reports in Vietnam recently confirmed how “Cat Lai is preferred over Cai Mep despite the latter being a deep water port” and as a result of transhipping through Cat Lai there are “delays and increased costs of around 30 percent” while roads regularly see gridlock.

In 2020, the Department of Transport reaffirmed an intention to continue to develop port facilities on the outskirts of Ho Chi Minh City. Since 2013, the City and provinces of Dong Nai and Ba Ria-Vung Tau have refused to license construction of any new ports or expansion to existing facilities.

There is also the reality that road and rail infrastructure is not keeping pace with economic growth in many areas, with a lack of developed roads and rail network simply pushing cargo onto already congested roads. Marine facilities at Cat Lai, for example, reportedly see 16,000-17,000 trucks on a daily basis, making it a hotspot for congestion.

The Ministry of Transport has known plans to invest between US$6 billion and $8 billion by 2030 in the next phase of port development, as part of a long-term plan for 2050. It will be needed.

There are a limited number of ports in Cambodia, with the two main facilities being Sihanoukville and Phnom Penh. Phnom Penh is a river port, located around 330km from the mouth of the Mekong. Although it serves around 150 ships per annum, container traffic is around 200,000TEU annually.

That leaves Sihanoukville, located in the Bay of Kompong Som, as Cambodia’s principal container option for entry and exit for goods being manufactured in the country. This port has old and limited infrastructure, although it still handled around 650,000TEU in 2020 – a similar figure to 2019.

There are, however, plans to address the situation, as Sun Chanthol, Minister of Public Works and Transport explained in Q3 2020 at the Ministry’s annual conference. “For the Sihanoukville Autonomous Port, we will build a new container terminal with a depth of 14.5m next year in order to accommodate the larger vessels travelling in the AsiaPacific region.”

The Minister added that work on the new container terminal will be commencing during 2021, with operations slated to commence in 2024, at a cost of around US$200 million. The investment is expected to add two terminals, with each facility offering 450,000TEU per annum of new capacity.

This additional capacity is needed in Cambodia. Even with a total of 900,000TEU and 14.5m draft, with current volumes already near 700,000TEU and the new terminals up to three years away, the new capacity cannot come quickly enough at Sihanoukville.

NOTE: The position of Malaysia, Singapore and the Philippines will be considered under a Part 2 review of South East Asia