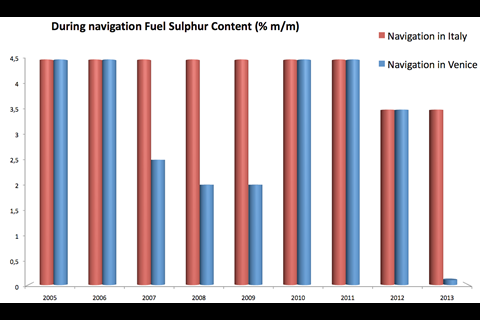 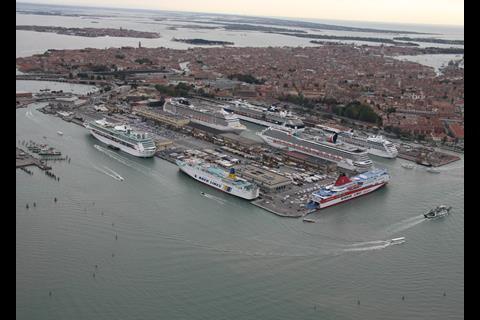 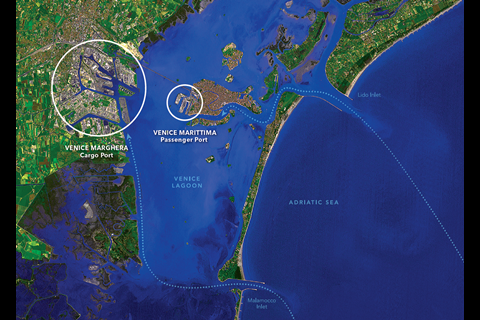 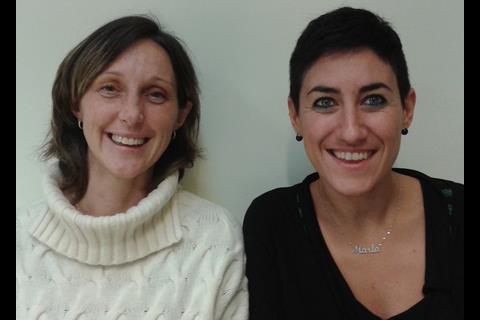 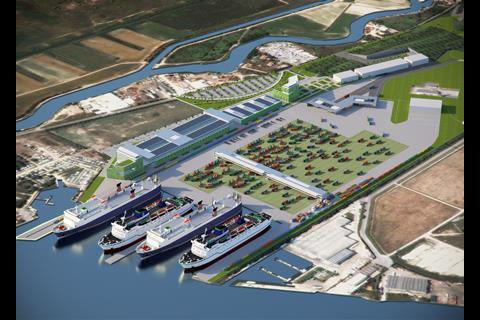 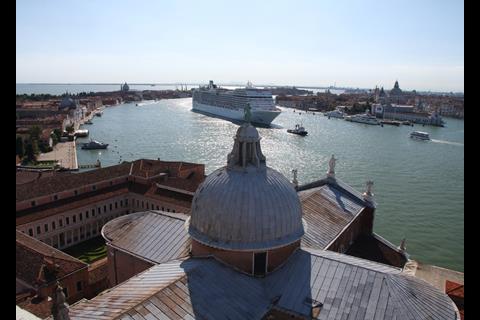 The container and cruise terminals at the Port of Venice have undergone many changes in the last decade but the development has been centred around the impact on local people and the environment, writes Marta Citron, chief of the environmental department, Alberta Parolin, official in urban Planning, Venice Port Authority.

The Port of Venice, located in the northern part of the Adriatic sea, in Italy, is one of the key components of the freight logistic chain in the Veneto Region and in the North-East Italian economic area.

Its location, at the top end of the Adriatic sea, as well as at the intersection of the main European transport corridors and of the Motorways of the Seas (MoS), gives it the right position to act as a European gateway for trade flows to and from Asia.

Venice Port Authority (VPA), works towards both the economic needs of maritime operators and safeguards the artistic/historical heritage located in the centre of Venice, by working to reduce passenger traffic issues through defining green policy, respecting international and national regulations and creating a proactive strategy to reduce impact.

In Venice's case, these goals can only be achieved by preserving the lagoon environment and the cultural heritage of the historical centre, which thanks to their unique characteristics are the driving elements that attract tourists.

To better explain the actions and projects of Venice Port, this article is divided into two sections. In the first section, new projects will be described in relation to progressive specialisation of port infrastructure and their relationship to Venetian heritage. The second section will deal with scientific issues.

The new Motorways of the Sea (MoS) ro-ro terminal located in an old abandoned and polluted industrial area in the southern of port territory, represents an important intervention of reconversion and remediation of port zones. Its location far from the historical centre, means a reduction of traffic congestion and related impact on Venice.

The picture on the next page, shows Marittima Station with ro-ro vessels at berth. The number of ferries entering through the Lido Inlet is around 500 per year. The elimination of the transit of these 500 calls through St Mark's Basin and the Giudecca Canal has had a discernibly positive effect on port traffic through Venice. For this reason, the Motorways of the Sea Terminal, which started operations in 2014, brings environmental, social and economic benefits of great significance the city.

Over the years, VPA has had to find new tools for analysing, planning and managing the best way to enhance the historical centre, transforming it from a strictly port/commercial and passenger area, into a multi-purpose area connected to the urban centre. This has led to the definition of operational areas dedicated to port activities and integrated areas. The aim has been to promote the port's ability to fit in with the scope and the activities of the city.

In 2000, port activities dedicated to cargo traffic located in the historical centre were moved to Marghera, but this meant old port areas and facilities, mainly warehouses, were abandoned.

So in the same year, VPA launched an urban regeneration process in the port's historical centre, by tearing down the wall that separated the port and the city, creating a pedestrian area and regenerating buildings, which are now used for specific urban/port functions. This process of opening up Venice port's waterfront to the city, is one of the best and tangible examples of the “open port” initiative promoted by the port authority to encourage dialogue and reach out to the local community.

Another important issue linked to the relationship between port and city is the "emotive perception" of cruise traffic. Even if statistical data demonstrates that the number of passenger ships is decreasing in recent years and that the management of port traffic in the historical centre has been improved (thanks to removing cargo ships from the historical area), there is a constant debate about cruise transits along port channels. It is the disproportion between the dimensions of the cruise ships and the Venetian historical and architectural context that makes many Venetians feel like inhabitants of Lilliput faced with Gulliver-sized ships.

To overcome this issue, it is important to underline that port activities are an example of intangible heritage that designates the cultural wealth of a given society. In this sense, one of the central aims of VPA is the promotion of maritime and port culture preservation. The port's history was first documented in the 5th century AD and is indissolubly entwined with the history of the city. The bond between Venice and its port has remained unchanged and both strive to consolidate their outlook for the city's future growth.

One action, requested by the national government in the 2012, was to limit the number of passenger ships in the St Mark’s basin and this formed the basis of research into an alternative channel for cruise traffic. Measures introduced by the Environmental Minister and Infrastructure Minister on 2 March 2012, forbad the transit of cargo ships and passenger ships of more than 40,000GT in the Giudecca channel, with the need to identify a different channel for them to reach Marittima terminal.

VPA, following these national directives, collaborated with relevant authorities to evaluate the best solution and on 5 December 2013 concluded that the most favourable alternative waterway was the Contorta S. Angelo channel. The upgrade of the channel will assist in the environmental requalification of the central Venice Lagoon thanks to the re-creation of natural "barene" (salt marshes) along the channel. This will contribute to the restoration of the central part of the Venice Lagoon, which is suffering from sediment loss. The project is currently under EIA review.

In order to be successful, the Port of Venice aims to be sustainable by carrying out activities under the so called “Green Port” initiative. The green port is not simply a slogan or a wish for the port authority. On the contrary, it summarises a concept that revolutionises the way the port has traditionally been developed and translates into a range of concrete actions. The VPA has carefully set up its environmental policy and defined procedures to be achieved in accordance with UNI EN ISO 14001, an environmental management standard that specifies a set of ecological management requirements for green management systems, including protection of the environment, preventing pollution and improving environmental performance.

Since 2007, VPA has adopted a proactive strategy to improve air quality that involves both compliance with existing regulations and undertaking voluntary endorsements to reduce air emissions. Back then, the local harbour office and VPA, together with cruise companies and the Municipality, signed the first “Venice Blue Flag”, a voluntary agreement on using low sulphur fuels and engine rules during mooring in Venice Port.

This agreement brought forward, by more than three years, the objective of reducing the sulphur content of fuel used around the port. The shipping companies that endorsed the first Venice Blue Flag in 2007 committed themselves to using a fuel with a sulphur content lower than 2.5% by weight, with an occasional margin of 0.5%, for the 2007 cruise season. This should be seen in relation to the international standards set by the MARPOL convention of the IMO, in particular Annex VI which allows for a maximum level of sulphur in fuels of 4.5% by weight, reduced to 1.5% for ships passing through special emission control areas.

This voluntary agreement has been renewed in following years, bringing the maximum content of sulphur for the 2008/2009 season down to 2.0% on the move and 1.5% at berth. The introduction of this increasingly restrictive limit on the sulphur content of fuels used by ships has meant a reduction in sulphur emissions at the port.

VPA has since teamed up with the National Research Council (CNR) to understand the effect the Venice Blue Flag rule has had on ship emissions since it was first put in place. Over the years, studies showed a 32% reduction in sulphur emissions from 2007 to 2009 following the implementation of the agreement. In 2013, a new voluntary agreement (Venice Blue Flag II) was put in place to encourage cruise ships to use a 0.1% sulphur content fuel in the Lido Inlet.

With the Venice Blue Flag II project a special "green zone" has been created with a very tight limit for emissions. The 0.1% target actually goes one better than the 3.5% sulphur limit currently acceptable in ports that will be reduced to 0.5% by 2020.

VPA is carrying out another project called Greenberth. The Greenberth project covers a wide range of Mediterranean ports as key central nodes of local and territorial development. The project aims to make port authorities take the lead in the evolution of SMEs at ports towards new business and management models based on sustainability from a social, environmental and economical perspective. To this end, Mediterranean port authorities must promote initiatives aligned with the reduction of energy resources and the improvement of energy efficiency in order to surpass technological barriers in port-city areas.

In particular, the project aims to study the improvement of energy efficiency and the use of green technologies implemented through the exchange of best practice by six key Mediterranean ports. VPA will take part in a pilot project related to green solutions for cruise mobility by implementing onshore power supply points for hybrid vessels connecting the port terminal to Venice airport.