The urgency of tackling emissions for European ports is highlighted in a new report launched at GreenPort Congress & Cruise 2022. 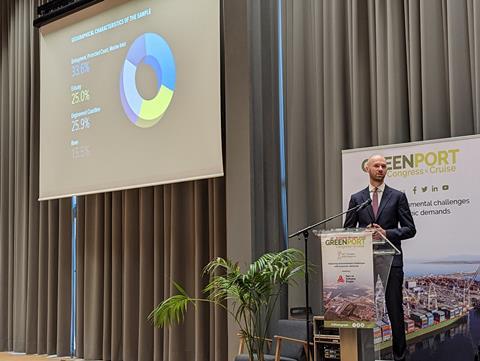 Ports have placed climate action as their most urgent environmental task for the first time, according to an annual survey of European ports. This year’s European Sea Ports Organisation (ESPO) Environmental Report was launched at GreenPort Congress & Cruise 2022 and shows greenhouse gas emission reduction, air pollution prevention and improving energy efficiency as the top three focus areas for port authorities.

The survey shows the top ten action points identified by 92 European ports. They include noise, water quality, community relationships, waste and port development. Air pollution had held the top spot since 2013 due to its impact on local environment and health, but abating global warming has become the biggest issue as port stakeholders including national governments and local communities increasingly demand action.

Presenting the report, Valter Selén, Senior Policy Advisor for Sustainable Development, EcoPorts Coordinator, ESPO said that the result was no surprise but was welcomed. He added that the positioning gave ESPO a “solid mandate to push for stronger policy for the greening of shipping”. The report also explores how climate and air pollution action is reflected across ports activities. Around half of the ports now offer onshore power supply (OSP), with a similar proportion expecting to implement it within two years in preparation for meeting the EU’s Alternative Fuels Infrastructure Directive. However, the share of ports with OSP at more than one berth fell, possibly reflecting the difficulty in generating return on investment while ship operators are not required to use the facilities.

The number of ports offering differentiated port dues – discounts designed to incentivise green ships– has also increased to more than 60%, which Sélen said reflected the willingness of ports to share the risk of decarbonising with other stakeholders. The report also shows progress in the number of ports adopting environmental management systems and certifications, and meeting several other key environmental performance indicators.