The final day of GreenPort Congress and Cruise concluded with a coach trip technical tour of the host port Antwerp-Bruges’ Zeebrugge site. 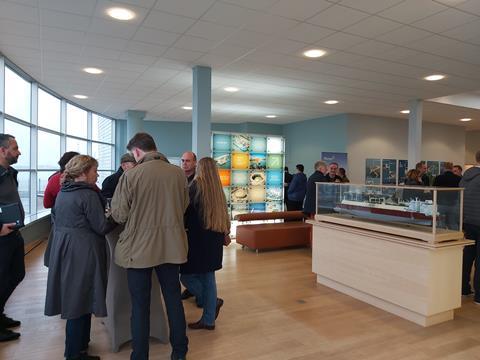 The tour started from the conference venue Bruges Meeting & Convention centre and included a brief history of Bruges from tour guide Piet Vandenkerkhove, Customer Relations Maritime Business/Market Intelligence/Accountmanager Cruise & Bulk, Antwerp-Bruges whilst delegates travelled to the port. Attendees were shown all aspects of the Port from the cruise and container terminals including a detailed tour of Bastogne Terminal of International Car Operators (ICO). The ICO’s Bastogne terminal is an important hub for the handling of roll-on/roll-off goods, with smooth inland connections in Europe by truck or train, or via shortsea connection to UK and Baltic area. Attendees heard from guide Fanny Arvai, Project Innovation Manager, ICO that 11 wind turbines, spinning in a row account for 44 MW of renewable energy delivered directly to the terminal. The wind turbines provide a total of 110 GWh of renewable energy per year, which corresponds to the consumption of about thirty thousand families, and keeps about fifty thousand tons of CO₂ out of the air each year. This local energy production is used, among other things, for 308 electric charging points found throughout the terminal.

The tour then moved onto Fluxys - LNG Terminal where attendees heard from Steven Van Caeckenberghe, Head of H2 and CO2 program regarding Fluxys’ plans to facilitate the development of the production of hydrogen using already created infrastructure and Carbon Capture. After his informative presentation Marie-Christine Leys, Visits – Events, Fluxys led an insightful tour of the LNG terminal, showing delegates all aspects of the terminal. The Port Tour was the perfect way for delegates to gain first-hand knowledge and examples of what had been discussed over the previous two days.

If you missed this year’s Greenport then the conference proceedings will be made available for purchase very shortly. Contact the team for first hand access on congress@greenport.com.