There has never been a more critical time for ports to harness green solutions as the race for investment in future fuels and decarbonisation accelerates. 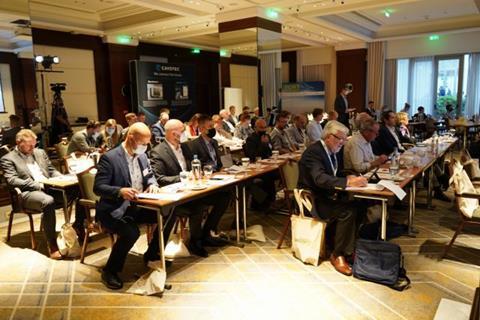 This was a key take home message from the first day of the 2021 GreenPort Cruise & Congress in Athens, Greece.

Speaking at the Port of Piraeus-hosted event at the Athens Marriott Hotel, Isabelle Ryckbost, secretary general of ESPO, said that with regards to investment, ports and shipping are still playing the chicken and egg game, but ports are “part of the new energy economy and taking a more active role in investing”.

She added that new partnerships and stakeholders are also important, and ports can take the opportunity presented by the energy transition to improve port city relations.

Three of its ships on firm order are LNG, including the first of MSC’s world class series of ships.

Coppell said MSC is not looking at LNG long term, but as a transition to either bio-LNG, from alternative feedstocks or synthetic LNG using hydrogen and captured carbon. Or even a different form of hydrogen.

MSC has made a zero emissions commitment by 2050. It hasn’t announced any further clean fuel vessel orders as it remains cautious about how future fuel investments across the industry will unfold and doesn’t want to risk “stranded assets”.

The company aims to focus on dual fuel or hybrid ships to retain flexibility, though in a nod to what might be next, Coppell said hydrogen is probably one of the biggest long term potential fuels, but it does need to be green hydrogen.

According to Coppell: “We need to make the right technology decisions, because ultimately it will come down to the fuels that are available to us.

“Ultimately it will be necessary for us to make decisions into the future. We can’t expect ports to have many different types of fuels available to us. But we have to keep our options open.”

Financing decarbonisation was also discussed between Ryckbost, Coppell and Captain Wen from the Port of Piraeus, with agreement from all that while gaps in usage need to be avoided, investment must be seen as a priority, wherever it comes from, as port installations take around five years to complete and that investment must be done in a fair and equitable way.

Noting the small margin for error, Strevens said: “We can’t afford to have limitations in our fleet deployment flexibility, as this decreases efficiency and decreases revenues.”

He stressed being sure what solutions ports are investing in is key, so as not to waste time and resources on a solution that isn’t being adopted. Knowing what competitors are doing is also important for standardisation across the industry, he added.

Malte A Siegert, chairman of NABU spoke on the topic of ‘ammonia as an alternative fuel’, providing some insight on the pros and cons of the fuel that is both already in use and emerging throughout the maritime sector.

He said ammonia is a winner in terms of availability, price and the fact it is carbon free, however, it is a risky fuel because it is toxic to humans and marine life. A better investment might be to develop methanol from a green source.

Siegert explained: “Methanol is a good fuel coming from green sources, but we have to look at where green hydrogen can come from. We have to get the infrastructure for green hydrogen and the consumer must pay.”

Maria Manuel Cruz, environmental manager at the Port of Aveiro, spoke about the ‘energy transition strategy of the port towards the European Green Deal’. She explained the port has focused on initiatives including renewable energy sources and biofuels, which it is providing to the port community. The latter is possible as the port is working in partnership with PRIOC, a local biofuel plant.

He said one of the biggest challenges for ports is the fact planning permission can take 5-9 years as this obviously limits how fast ports can invest in technologies like onshore power and offshore wind.

Power shortages and security of supply are both issues with shore power and will likely continue to be an issue as “by 2050, demand for electricity will grow threefold”. Norway hasn’t let these challenges stand in its way though and now has the most shore power connections for cruise ships at ports in Europe, and investment expansion is happening in other countries as well, including Germany and the UK.

He touched on the dominance of LNG in the current future fuels market, pointing out that LNG-propelled ships account for 13% of new orders, though methanol-fuelled ship builds are increasing, and hydrogen is now being used on several smaller vessels, such as ferries.

Carbon capture and storage (CSS) is also playing a role in the pathway to decarbonisation.

He left delegates with a pertinent question: “How are we going to produce the required quantity of zero carbon fuel vessels at scale, as these vessels will need the zero carbon fuels to run on, which is a real issue.”

Demonstrating the benefits of partnerships at the Port of Piraeus cruise terminal, Thanassis Karlis, strategic planning and marketing officer at Piraeus Port Authority, told delegates that working with local universities has enabled the port to install an air monitoring station, while the port is also working with a group of young people to generate ideas about future sustainability initiatives. The terminal is currently building two new cruise berths with shore power availability to further cut emissions.

The subject of shore power continued with Associated British Ports (ABP) as Sue Simmonite, sustainable development manager at ABP Port of Southampton, confirmed two terminals at the port will be shore power enabled by next year, but acknowledged power availability and finance are key challenges with the technology.

She explained the port’s new GB£55m shore power-enabled Horizon Cruise Terminal is “made from all sustainable materials” and fitted  with more than 2,000 roof-mounted solar panels, which means that on a day-to-day basis it will generate more power than it uses.

The shore power advice from Laurent Dupuis from Cavotec was to involve stakeholders early on. “Find the right partner at the early stage of your shore power journey,” he stressed.

Implementing emissions reduction infrastructure should only be done when it makes sense, he said , citing the EU-funded project that made Malta the first location to install a shore power system for cruise in the Med. The project was carried out by Cavotec and Nidec, but would not have been logical ten years ago before Malta became connected to Italy’s grid.

Valeria Mangiarotti, senior vice president and director of sustainability and environmental issues at MedCruise, believes the ports MedCruise represents are “not ready” for shore power because infrastructure is not yet adequate. “We are working towards shore power, but I am not convinced we are ready,” she said.